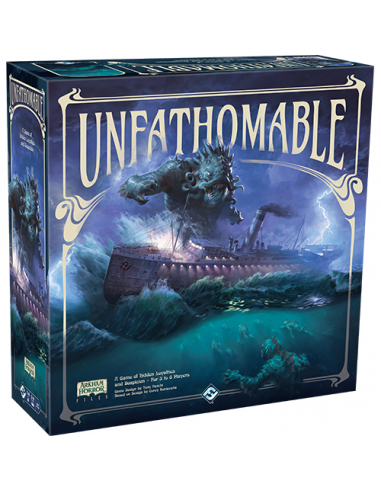 Lurking within the depths of the Atlantic Ocean are a swarm of vicious, unspeakable horrors: the Deep Ones, led by Mother Hydra and Father Dagon. For reasons unknown, they have set their sights on the Atlantica, and their minions, taking the form of human-Deep One hybrids, have infiltrated the steamship to help sink it from within. Each game of Unfathomable has one or more players assuming the role of one of these hybrids, and how well they can secretly sabotage the efforts of the other players might mean the difference between a successful voyage and a sunken ship.

If you're a human, you need to fend off Deep Ones, prevent the Atlantica from taking too much damage, and carefully manage the ship's four crucial resources if you want any hope of making it to Boston, all while trying to figure out which of your fellow players are friends and which are foes. Everyone shares the same resource pool, but humans will try to preserve them while traitors will strive to subtly deplete them. Being able to tell when someone is purposefully draining the group's resources is harder than you think, especially when you take crises into account!

At the end of each player's turn, that player must draw a mythos card. Each of these cards represents a crisis that the whole group must try to resolve together. Some of these crises, such as "Food Rationing", call for a choice that could potentially put the ship's passengers or resources at risk, while others, such as "Hull Leak", call for a skill test in which failure could have disastrous consequences.

During a skill test, each player contributes skill cards from their hand to a face-down pile shared by the group. Once everyone has contributed (or chosen not to), the cards are shuffled, then revealed. If enough of the correct skills were contributed, then the group passes the test! But if the wrong skills were contributed, they can actually hinder the results, leading to failure. Thus, skill tests are dangerous opportunities for traitors to sabotage the humans' efforts, so you have to stay on your toes at all times. 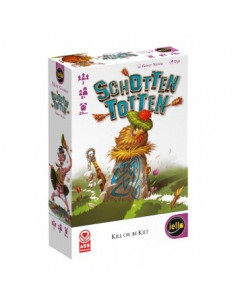 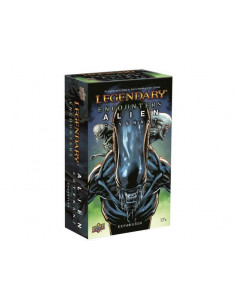 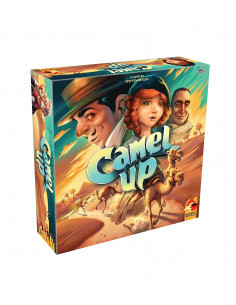