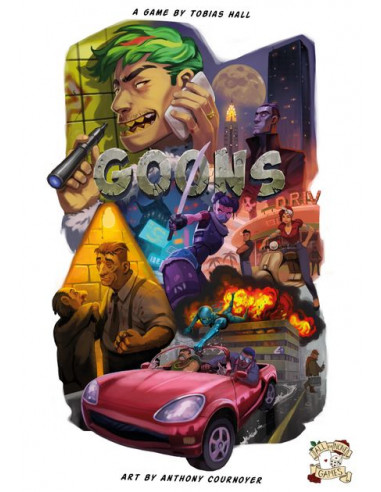 Goons is a euro-style strategy board game in which the players will try out new thrilling careers as henchmen throwing themselves right into the heat of the fire! The goal is to cleverly manage your energy, earn as much cash as possible, get cool new gear, increase your reputation on the streets, and back the villains that will be the most beneficial for you in order to get as much victory points as possible.

On a player’s turn they will combine two actions by drafting an action cube from the game board and place it on an action space on their crib board. Actions include going to The Dojo to increase your energy, shopping for new gear at The Supermarket, earn a little extra at the local Diner, or mixing things up on the game board at The Nightclub. Players can also go hustling on the streets and advance on different hustle tracks for all sorts of rewards and compete for the top spot.

But most importantly, players will use their actions to commit to different daring villain schemes by placing energy markers on them to increase the chances of success and rewards. Each villain has a unique deck of schemes with a special theme and game mechanic offering different risk and rewards for every round. So players will have to consider carefully which ones to support… Will you take a risk with Kid Random's schemes for a potential bigger reward, go trade with Jolly Butcher, or play it safe with The Doctor? It's up to you!

The game is divided into 3 rounds and the goon with the most victory points at the end of the game is really awesome and wins the game!